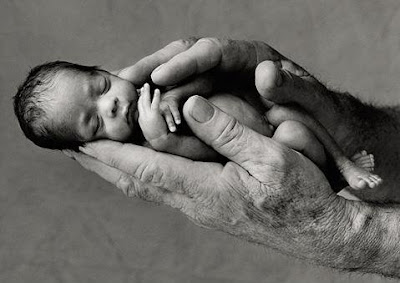 The following is an excerpt from the most compelling article about abortion I've ever read. I first read it on 1516 (another blog I love!) and was so moved that I had to direct you to it as well.

"Hern and Harris chose to stay in the abortion business; one of the first doctors to change his allegiance was Paul Jarrett, who quit after only 23 abortions. His turning point came in 1974, when he performed an abortion on a fetus at 14 weeks' gestation: "As I brought out the rib cage, I looked and saw a tiny, beating heart," he would recall. "And when I found the head of the baby, I looked squarely in the face of another human being—a human being that I just killed."

"Kathy Sparks is another convert formerly responsible for disposing of fetal remains, this time at an Illinois abortion clinic. Her account of the experience that led her to exit the abortion industry (taken from the Pro-Life Action League website in 2004) reads in part: The baby's bones were far too developed to rip them up with [the doctor's] curette, so he had to pull the baby out with forceps. He brought out three or four major pieces. .  .  . I took the baby to the clean up room, I set him down and I began weeping uncontrollably. .  .  . I cried and cried. This little face was perfectly formed."

"Other converts were driven into the pro-life movement by advances in ultrasound technology. The most recent example is Abby Johnson, the former director of Dallas-area Planned Parenthood. After watching, via ultrasound, an embryo "crumple" as it was suctioned out of its mother's womb, Johnson reported a "conversion in my heart." Likewise, Joan Appleton was the head nurse at a large abortion facility in Falls Church, Virginia, and a NOW activist. Appleton performed thousands of abortions with aplomb until a single ultrasound-assisted abortion rattled her. As Appleton remembers, "I was watching the screen. I saw the baby pull away. I saw the baby open his mouth. .  .  . After the procedure I was shaking, literally."

To read the entire article (…which I strongly encourage you to do…) click here.