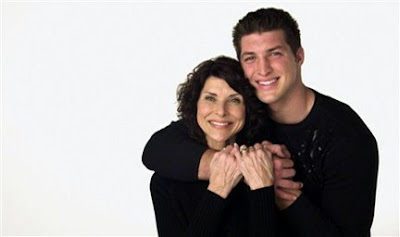 I just read the most refreshing article by Sally Jenkins who is a sports writer for the Washington Post. She herself is admittedly pro-choice, but has written an insightful and logical editorial about Tim Tebow’s Super Bowl Ad and those who criticized it. Here are a few excerpts:

“I'm pro-choice, and Tebow clearly is not. But based on what I've heard in the past week, I'll take his side against the group-think, elitism and condescension of the ‘National Organization of Fewer and Fewer Women All The Time.’ For one thing, Tebow seems smarter than they do.”

“Tebow's 30-second ad hasn't even run yet, but it already has provoked "The National Organization for Women Who Only Think Like Us" to reveal something important about themselves: They aren't actually "pro-choice" so much as they are pro-abortion.”

“Pam Tebow and her son feel good enough about that choice (to carry through with her difficult pregnancy) to want to tell people about it. Only, NOW says they shouldn't be allowed to. Apparently NOW feels this commercial is an inappropriate message for America to see for 30 seconds, but women in bikinis selling beer is the right one.”

“You know what we really need more of? Famous guys who aren't embarrassed to practice sexual restraint, and to say it out loud. If we had more of those, women might have fewer abortions. See, the best way to deal with unwanted pregnancy is to not get the sperm in the egg and the egg implanted to begin with, and that is an issue for men, too -- and they should step up to that.”

Click here to read this incredible article! Its worth your time.
Posted by Noel at 2:07 PM